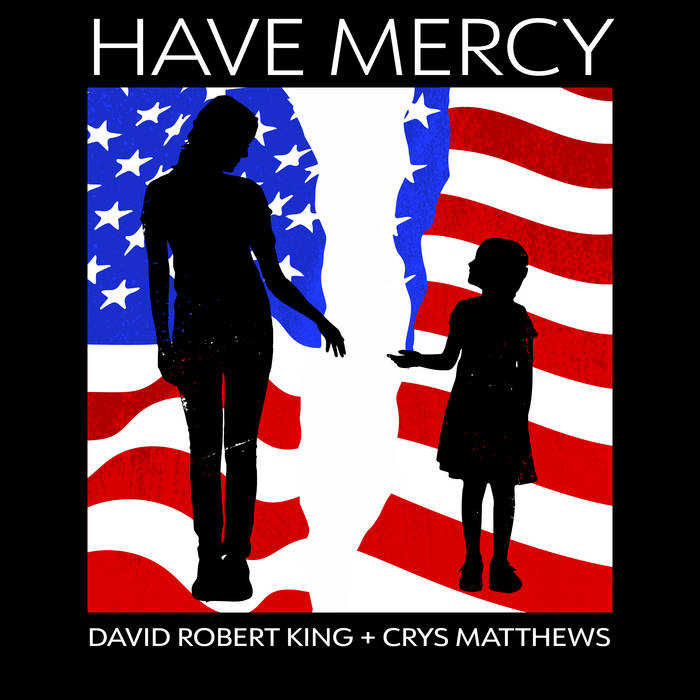 “HAVE MERCY” INSPIRED BY FAMILY SEPARATION ALONG U.S. SOUTHERN BORDER.

“Have Mercy” was recorded at Echo Mountain Recording Studios in Asheville, NC and produced by Gar Ragland of NewSong Recordings.
King and Matthews met as finalists last year in the esteemed NewSong Music Competition at Lincoln Center for the Performing Arts in New York City, where Matthews took the Grand Prize, and King was her runner-up. The songwriters kept in touch, and, less than a year later, they found themselves in Asheville, NC, recording the co-written single.

“I woke up one morning with the first verse running through my head,” says King, whose voice and songwriting style bears frequent comparisons to the likes of Lou Reed and Leonard Cohen. “I had been digesting the 24-hour news cycle for too many days in a row and was crushed, specifically by the separation of families along our southern border.”

King is coming off a successful year of making music. His 2017 album, Idaho, was produced by Darryl Neudorf (Neko Case, The New Pornographers, Sarah McLachlan). No Depression has praised the musician, calling Idaho “good for the soul,” full of “folk-drenched songs of the world class order.” King recently performed at the 30A Songwriters Festival, alongside Steve Earle, Emmylou Harris, Mary Gauthier, and others. He has collaborated with Emily Saliers of The Indigo Girls, Jonatha Brooke and others, which had led to a top 40 song on folk and roots radio, wide critical acclaim, and a featured spot at AMERICANAFEST 2017.

Earlier in the summer, King reached out Ragland, who also produces and co-founded the NewSong Competition, to tell him about the co-write. “David sent me a rough demo of the song,” says Ragland. “I was deeply moved … not just by the song but also the spirit of the collaboration that went into it. After just one listen, I insisted that the three of us get together here in Asheville to record it at Echo Mountain.”

The production is spare, relying on the power of the duo’s enchanting harmonies, acoustic guitar, and the emotional weight of their lyrics. While “Have Mercy” has elements of a classic protest song, is also contains a gentleness and optimism that transcends the merely political. King felt there was an “inherent hope” in the song and immediately thought of a collaboration with Matthews, whom he had met through the NewSong community. “I knew her voice and perspective would take the song where it needed to go,” he says.

Matthews’s career has taken a big step forward since winning last year’s NewSong Music Competition, with recent performances at the Sundance Film Festival and D.C.’s Kennedy Center for the Performing Arts. “My mom, who is a preacher, talks to me all the time about how hard she is praying for our country these days with all of the turmoil and despair that seems to be running rampant,” says Matthews. “The song to me just feels like that prayer.”

This land should be where broken pieces come together,
not where they're further torn apart,
where the weary soul finds peace in times of stormy weather,
and a place to rest the tired heart

This land should be where being 'human' is the holy tie that binds,
not where worth is race or place or background,
where everybody knows that it takes all kinds of kinds
to keep this ol' world spinning 'round

There are lessons to learn from the bridges (we’ve) burned
Our prophets are pointing to our past
It’s written in the stars, and it’s written in their scars
That bleed the dream that all shall be free at last (of freedom at last)